Table of Contents in IPTV Restream

IPTV Restream | I’ll start the review of one of the streaming software available on the market, with version 2.2.0 EVO of IPTV Panel Professional Edition developed by Xtream-codes.

The Software is mainly used for the so-called IPTV broadcasting, but also with great potential for all kind of other content delivery applications such as audio and business streaming, cloud video transcoding, and all other kinds of global streams.

What is IPTV? IPTV Restream

Internet Protocol television (IPTV) is a system through which television services are delivered using the Internet protocol suite over a packet-switched network such as a LAN or the Internet, instead of being delivered through traditional terrestrial, satellite signal, and cable television formats. Unlike downloaded media, IPTV offers the ability to stream the media in smaller batches, directly from the source. As a result, a client media player can begin playing the data (such as a movie) before the entire file has been transmitted. This is known as streaming media.

IPTV services may be classified into three main groups:

This review will contain results mainly for the “end-user” or business owner, who already owns or bought legitimate streams, as Xtream-codes IPTV software does not provide any video streams, and “only” helps distributing your content.

After you registered at https://xtream-codes.com and placed your order, you get access (after payment) to your unique default root username, default root password, and your CMS Address.

You can now log in with both credentials, and start adding your server addresses. Your Server IP and SSH Password is required, and the whole process is pretty straightforward. 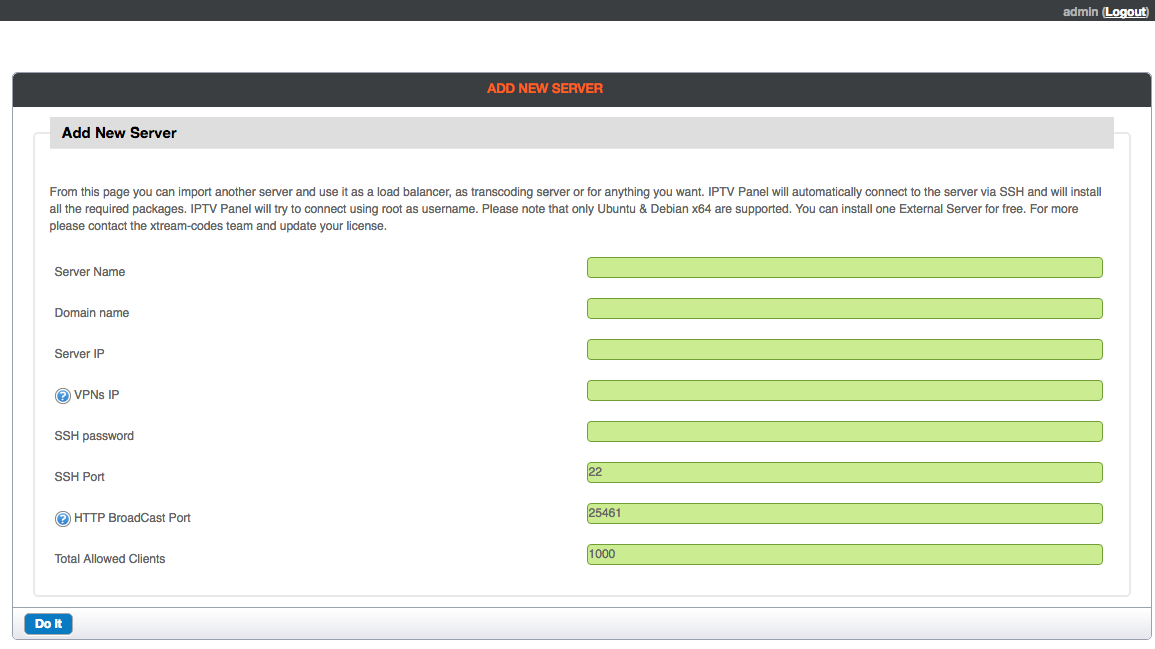 If necessary, you can add a second Load balancer Server by the same method. If you need more Load balancers (LB’s) in the future, you will have to pay an extra Fee. Xtream-Codes call this “plugins”, but I guess it’s a simple SSH Protocol.

They activate on their server side, like: 2/4/6 LB’s…. Again, the first LB is free of charge. IPTV Restream

If you are confronted the very first time with it, it might be confusing at first with all the available options, but be assured, that after 1 or 2 days you’ll be getting used to it. Many features and possibilities are waiting for you, and it also a few have’s and have not’s. Let’s start with the “have’s!

One of the great features in version 2.2.0 Evo is the Transcoding process. Here a general overview of the 2 Versions: Profesional and Minimal Editions. 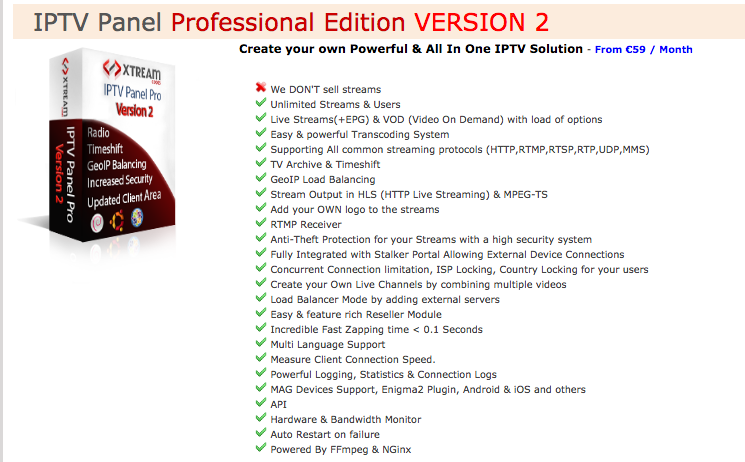 As you might expect, the professional edition adds several features including:

The Menus & Options  of the Panel

The Transcoding or Video-Conversion process

This is one one of the “Highlights” of Xtream-Codes IPTV Panel. I’ve tested over a hundred different kinds of formats, from Blu-ray-MKV, different AVI’s, FLV, MP4, WMV, MOV and OGG. Each time the transcoding process was successful.

I also tested quite a few homemade AVI’s without transcoding, all watchable later on. But for professional hosting, large sized movies should be encoded before transferred to your server, in my opinion. The reason is mainly the later ability for your future customers to watch the movie streams, without any kind of freezings or bufferings. Due to Internet limitations, and nowadays also server bandwidth problems, the movies should be transcoded in 720p maximum and the file size should be around +/- 1GB each. The bitrate should be somewhere around 2 – 3000k maximum. This would later almost guarantee the freeze free availability of the stream, if the user owns a decent Internet connection. Not everybody have an 200 Mbit/s and up broadband connection.

Sure, there are higher bitrates possible and many customers already crying for lossless FHD’s streams. In my eyes often a wishful thinking. Too many components playing a huge role in the Internet world, and last but not least there’s always the question of bandwidth. 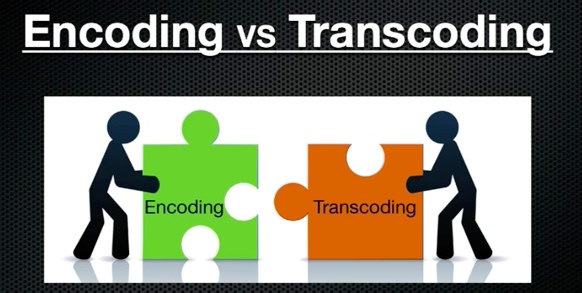 “What’s the difference between encoding and transcoding?” was one of the first questions I had when I started working with video’s and IPTV streaming. I had always used them interchangeably and after a quick Internet search I was surprised that I did not find a clear answer. IPTV Restream

While encoding and transcoding both represent ways of converting files between formats, there is a distinct difference:

Despite the clear differences by definition, I’ve noticed that only technical experts tend to use the term with distinction. People getting started with video are often left behind and confused between the terms like I was. I hope that with this short note, we were able to shed some light on this myth….

Here you can see the different kinds of VIDEO and AUDIO transcoding codecs available: 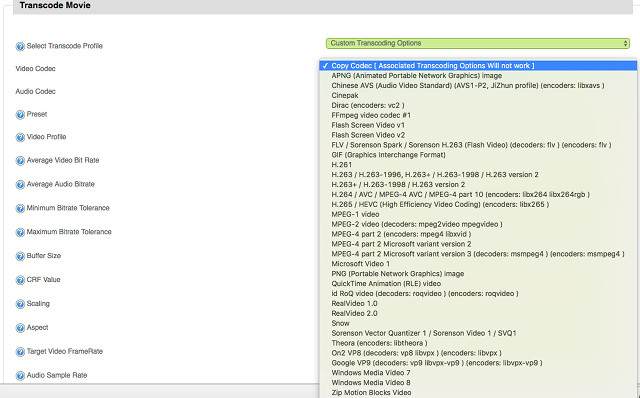 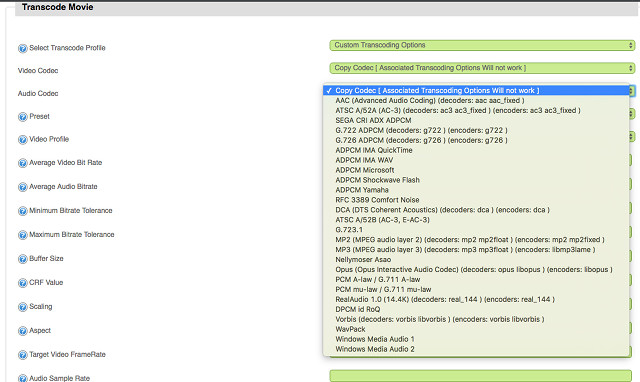 The Preset option allows you to select between ultra fast and very slow transcoding options, which should also affect the video quality. IPTV Restream

The Video Profile option (in my opinion too many Apple’s…) 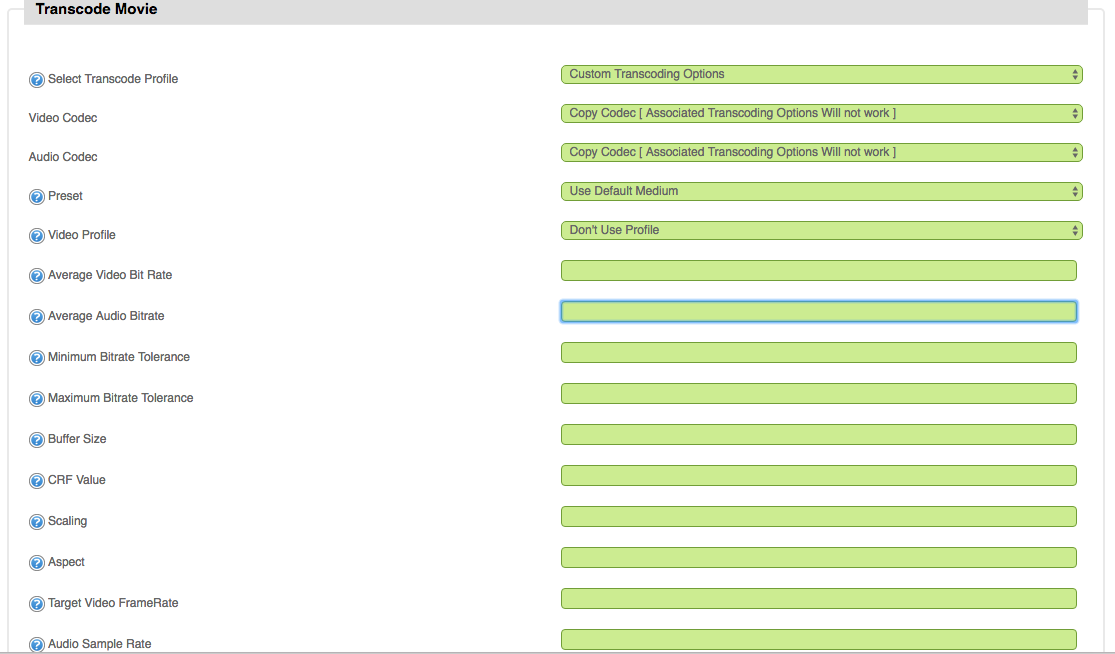 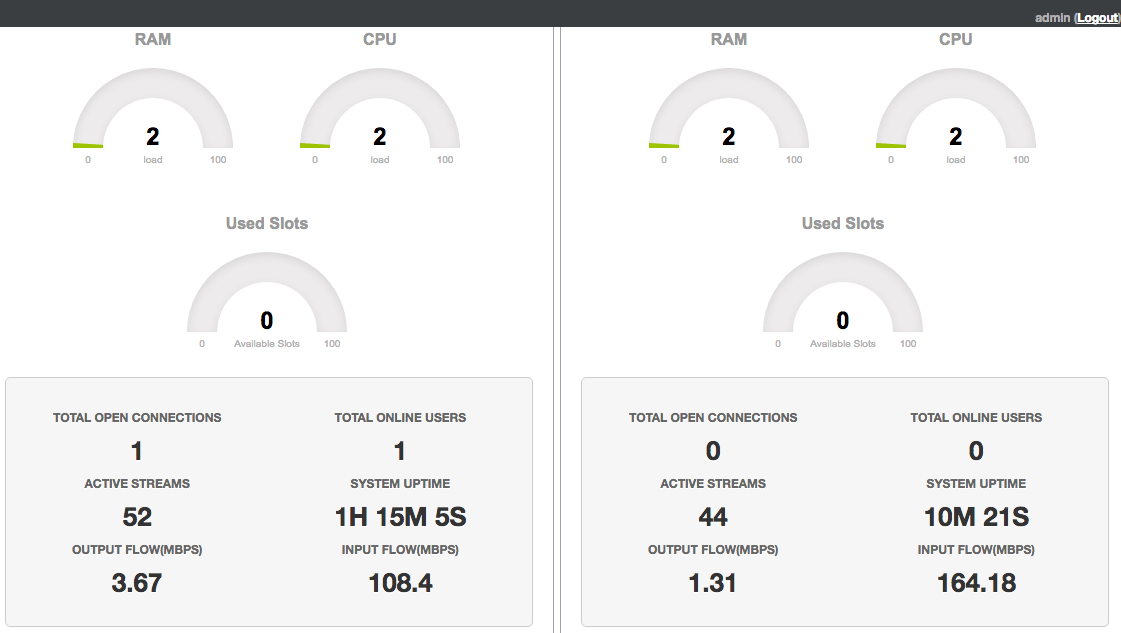 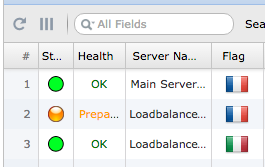 Load balancing Chart? What this feature is doing exactly? As stated before, IPTV Panel Pro has load-balancing mode that will redirect your users automatically to other servers in a case of huge load. The load-balancing chart is being used to control the SOURCE flow or how the stream source will be transferred to your servers.

You can draw any flow you want depending on your needs. IPTV Restream 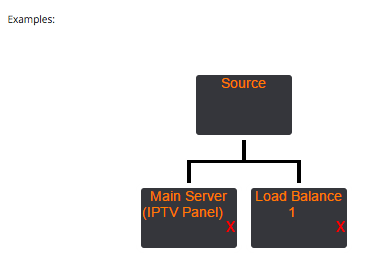 Both servers will take the stream from the source in the configuration above. 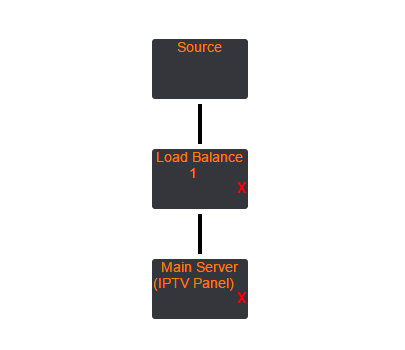 In this case, the server “Load balancer 1” will read the stream from the source and at the same time he will transfer the same stream to the second server.

Implementing LEGITIMATE Streams in your Panel and Managing Streams

Attention: Many customers make here a major mistake, with the result of missing audio and other misbehaviors in the stream later. What Video & Audio Codec should I use if I transcode later?

Xtream Codes has added many video & audio codecs but not all of these codecs are supported for IPTV use. To be on the safe side, you should always use the H.264 as video codec and AAC as audio codec for IPTV use. 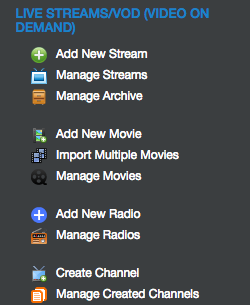 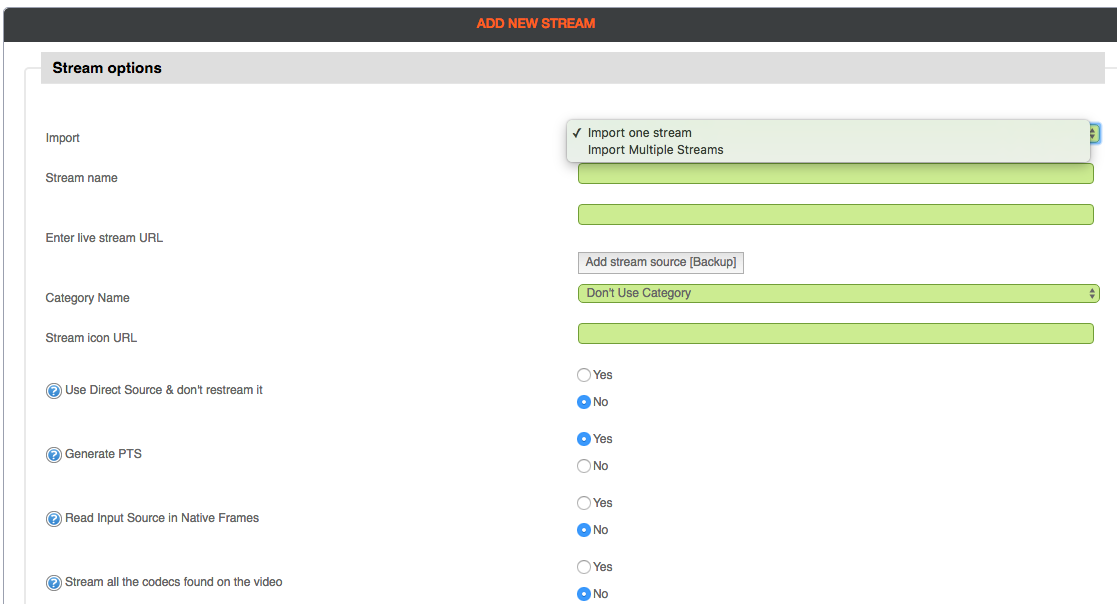 We have several options later, how the streams can act. For better understanding, it’s theoretically possible that you “restream” your legitimate bought streams later. In other words…in some cases, you may want to sell these streams to other resellers. 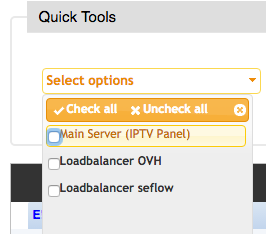 You can also add a movie you uploaded to your server previously, or even from a remote source. 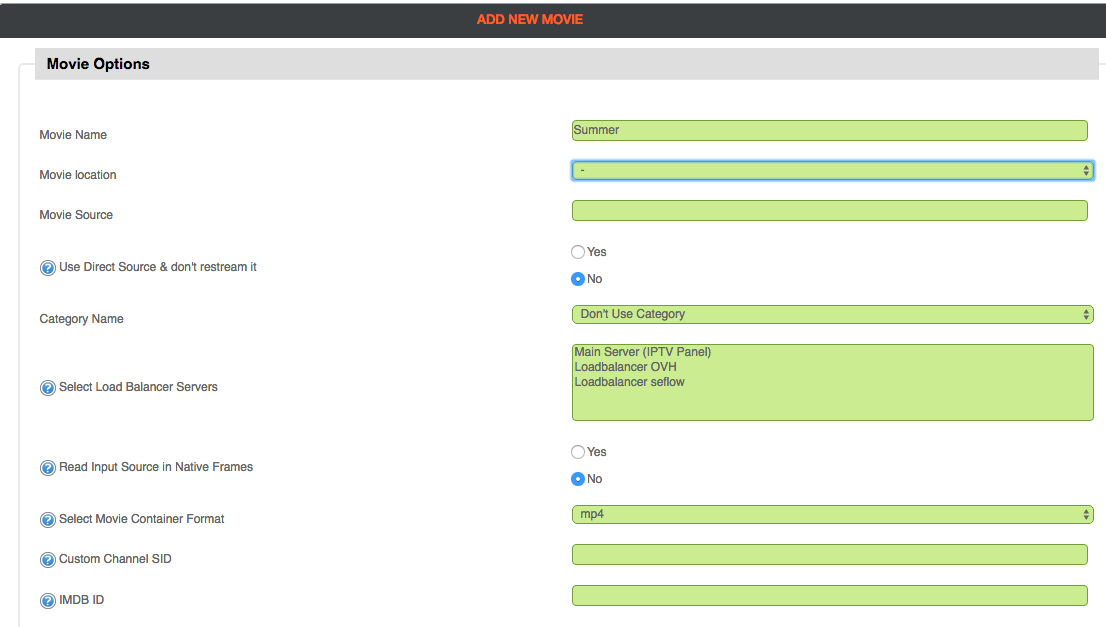 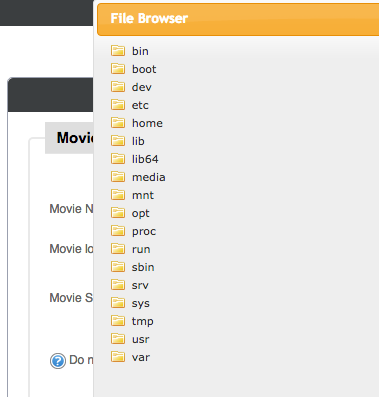 If you add a movie from your own server, it works over the integrated file browser, while if you want to stream from a remote location, simply type in the location.

You can set read “Input Source in Native Frames”, and  if you are transcoding, set it to YES.

You like to have a picon for your Movie? Here you can add a IMDB ID. IPTV Restream

But here we go…Movies! It is common in this business, that once a while a server is having issues, and most times the load balancer also gives up. If this happens, and no matter the backup of your data bank, you are in troubles. You may have tons of movies in backup, and must re-assign them all again to a server manually.

This feature is definitely missing in the editing movies section. There are only 3 parts: Add New Movie, Import Multiple Movies and Manage Movies.

The scenario: You transfer in an emergency case over ssh protocol sftp-wise all your movies to an other server. You set up a new OS or reinstall one, and you get a new root password. After making a new server with Xtream Codes Panel, so far, so good. But you have to assign them later, all of them! A mass-edit regarding assigning movies to the main server or one of the load balancers would do it! Saving a dramatic amount of time for a customer. I repeat myself here, I mentioned that above already, regarding “add a new stream”. No reason for me to think of right now, that it should not be possible to assign this stream to a bouquet, and not only in to a category. setup xtream codes

It’s the same procedure as adding a video stream. You can import a single or multiple Streams from a file. 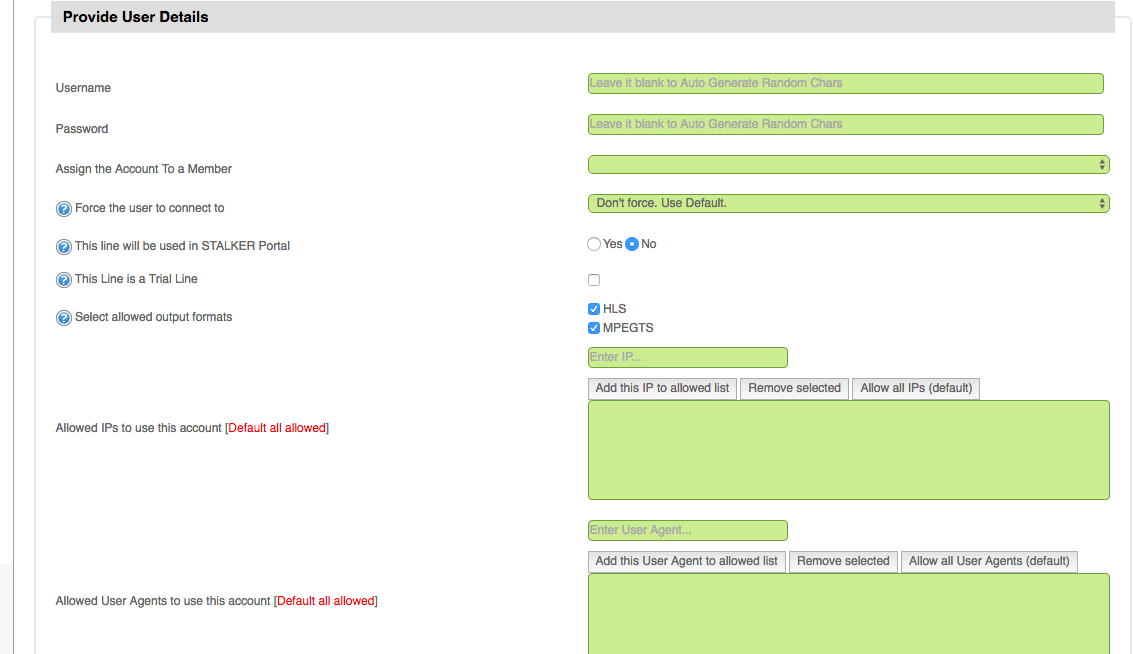 Creating a new customer line is a piece of cake; just fill up the necessary fields. Like user, a unique password if you wish so, you even can use the created line in a stalker portal, but watch out then, please read:

If a customer has a MagBox for example, the better option is to bind the box over the MAC address. It is even possible to bind a before created simple m3u Playlist to a newly created MAC address. Simply go to “Add New Mag Device” and associate the existing line to it. setup xtream codes

Another useful feature is the so-called Restreamers Finder. In these days there are many restream software’s for ordinary users on the market, like Hola addons for Android Systems and many more.

Not absolutely clear about this feature. What is a “User Agent”? A User Agent is normally a short string that web browsers and other applications send to identify themselves to web servers. Unfortunately, most browsers falsify part of their User-Agent header in an attempt to be compatible with more web servers. Useful, but I find that the manual assigning of each single user agent is a hell of a work. There are preconfigured block lists already in the Internet and it would be from great help, if Xtream Codes would allow loading a whole list.

IP blocking is clear, but what is a CIDR? Classless inter-domain routing (CIDR) is a set of Internet protocol (IP) standards that is used to create unique identifiers for networks and individual devices.

The IP addresses allow particular information packets to be sent to specific computers. Shortly after the introduction of CIDR, technicians found it difficult to track and label IP addresses, so a notation system was developed to make the process more efficient and standardized. That system is known as CIDR notation.

There is still some work to do specially in the editing sector, one of the most important parts of streaming software:

Ending the first part, I want to say thanks to Xtream-Codes for giving me the tools and the necessary “LB Plugins” (Naaaa, not a plugin, Xtream-Codes! Call it a Addon better!) to start.